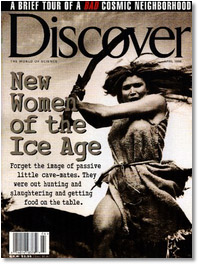 The April issue of Discover magazine features a radically new image of Paleolithic woman -- fierce, ferocious, aggressive: "Forget the image of passive little cave-mates," reads the caption. "They were out hunting and slaughtering and getting food on the table."

A feminist archeologist, Olga Soffer, described in the Discover article as "one of the world's leading authorities on Ice Age hunters and gatherers" has been eager to disprove the gender stereotypes that researchers in her field have been propogating for the last chauvinistic century or so -- stereotypes such as the idea that Ice Age women stayed in the cave all day nursing the young and waiting eagerly for their men to bring home fresh wooly mammoth meat. A stereotype she and her colleagues describe with all scientific detachment as "crap."

No matter how much scientists grasp the reality that to propogate the species, mothers must care for their young, feminist scientists like Soffer are still offended by that reality. The image of a cave-wife seems unfulfilling to feminists, especially since the men had the fun day-job of slaughtering the animals.

Or did they? Soffer believes they didn't kill as much game as researchers once believed, largely because women of the age shared in meal-gathering responsibilities. Her evidence indicates that 25,000 years ago women wove hunting nets, caught small game such as fox or hares in the nets, clubbed the small animals to death, and gathered plants. Of course, after reading the article, the cover photograph of a crazed, violent amazon smacks of overkill.

Nevertheless, Heather Pringle, the article's author, praises Soffer's work as some sort of modern realization of "how critical the female half of the population has always been to survival." A scientific journalist is excited about the discovery that women are capable of killing to put food on the table? Until 50 years ago, American housewives routinely decapitated chickens and skinned rabbits in their backyards. You don't need a degree in anthropology to understand women's survival capabilities -- you only need to visit a farm.

Pringle also feels that "Soffer brings a new critical approach to the notion -- flattering to so many of her male colleagues -- of mighty male mammoth hunters." The fact that scientists leak personal bias into their work is not a new discovery, but are we to assume that Soffer is not in any way biased in her interpretations, which are more flattering to women?

In fact, Soffer does seem totally preoccupied with how history might be flattering, or unflattering, to women. She and her colleagues are so hung up on the idea that the image of men killing wooly mammoths somehow boosts the egos of male archeologists that she's strayed from the sterile arena of scientific fact-finding to angrily editorialize: "If one of these Upper Paleolithic guys killed a mammoth, and occasionally they did, they probably didn't stop talking about it for ten years."

Nice talk from a woman of science, speculating on the reactions of individuals living 25,000 years ago, then showing utter and blatant contempt for them. One wonders if she would be so dismissive of the activity if she'd uncovered evidence that Paleolithic women were killing mammoths? If she ever finds such evidence -- and you can bet she's still looking for it -- she probably won't stop talking about it for 20 years.